“The City Beautiful” as Chandigarh is called is the only city in the world with monumental architecture set alongside acres of whimsical and fantastical art installations. Its public gardens has 800 types of roses and a tranquil lake connected by wide, tree-lined boulevards. And if that isn’t reason enough to visit, consider luxuriating just outside the city at a 25-acre resort focused on wellness.

Chandigarh has also been called “a time capsule of Mid-Century Modern and Brutalist architecture”. The dream city of Nehru, India’s first Prime Minister, was designed by Le Corbusier. Construction began in the 1950s, and by the early 1960s architecture lovers and students were coming here to see and study India’s first planned city, based on a grid pattern.

Raj, our exceptional tour guide with Micato Safaris, drove us along wide boulevards lined with trees, past kids in playgrounds, past exercise groups and yogis in parks to swanky Section 17 with its posh residential homes and the city’s shopping hub before our noon appointment at Section 1.

Not yet noon, we stopped for shade under a Mulberry tree and Raj picked for us the sweet, juicy berries. Another shady spot is the “Shadow Tower”, a sculpture intended to hang out in and designed by Corbusier. Not one ray of sunlight enters (apparently at any angle of the sun) but it lets in a much-needed breeze. Next we entered he “Palace of Justice”—the geometric rainbow building (bring your passport for entry). Thanks to Micato Safaris we didn’t have to lineup.

Around the same time that Chandigarh was under construction, Nek Chand, a road inspector for the public works department, was building off the grid. Chand collected debris—electric plugs, broken ceramic mugs, kitchen tiles, bottle tops and oil cans, virtually anything he could carry on his bike— from the villages destroyed in the 1950s to a secret spot in the forest outside the city.

Chand’s walls and sculptures were discovered in 1975 by the authorities. Thankfully his vast creation was recognized for what it was, and the Rock Garden of Chandigarh was opened to the public one year later.

Just past the entrance we were gob-smacked with a wall built entirely of light sockets, and other filled with chipped porcelain cups. Going further into the 25-acre , surreal sculpture park we strolled a maze of curved walkways, past waterfalls and turrets and under arches and everywhere is filled with eccentric and undpredictible stuff. You can easily spend a day or two gawking at thousands of totemic-looking human figures and animals that Chand sculpted out of rubbish. Talk about recycling!

Despite Le Corbusier and the Rock Garden, Chandigar was still off the beaten track for many tourists, and rather far off the usual “golden triangle” route for most visitors to India. I fortunately discovered the “green city” as part of a 10-day Indian tour with Micato Safaris. “We used to bypass Chandigarh on our way to Shimla. Us boys went to the mountains on our motor bikes to camp,” says Raj. “We only knew of pilgrims stopping here on their way to the holy shrine of sikhs at Amritsar.

Capitol Complex became a UNESCO World Heritage destination in 2016, coincidentally the year that Oberoi Sukhvilas Spa Resort opened its doors. If you aren’t familiar with Oberoi hotels, they are more than a typical luxury resort. Think palace with culture and superb cuisine. Smack in the middle of a peackock forest, with a backdrop of Siswan Forest Range and the foothills of the Himalayas, you can sleep in “glamping” tents that have more amenities than most hotel rooms and swim in your private plunge pool before traditional Punjabi breakfast is served, sourced from ingredients on their 2-acre farm.

The Ayurvedic spa wasn’t open for business, but we did see the impressive building. And judging from the Oberoi standard (I went to three other Oberoi hotels with Micato Safaris India, including two spas), it won’t disappoint. Instead we splashed around the indigo-blue

Olympic-sized swimming pool and had a terrific yoga session on the lawn, shared with a few curious peacocks.

Next morning we drove to the Siswan Forest Range, to a cacophony of giant peacocks in about the ash trees and below, a dense forest of marijuana far as the eye can see. But you won’t find many humans in this part of the forest because you can only get here on a guided tour with an Oberoi naturalist.

It was a chill 33 degrees celsuis. After hiking about an hour (guests can also arrange to have mountain bike delievered to the lake) the Oberoi staff delivered our picnic, complete with smoked salmon canapés, table and chairs, linen napkins and wine. The chaos of India seemed so far away. 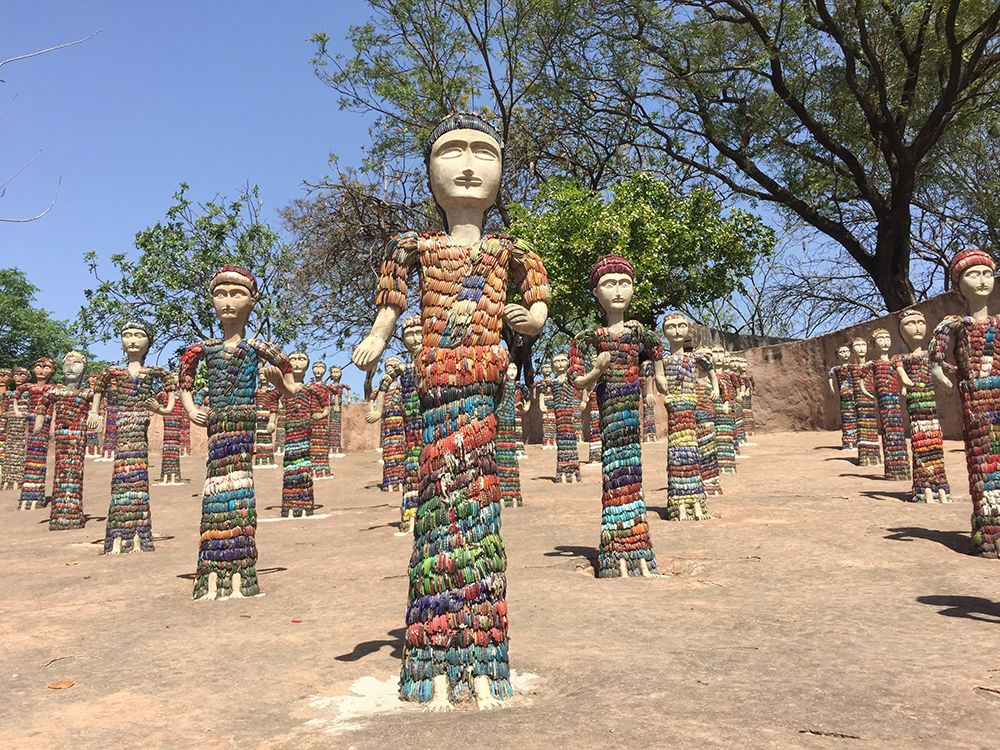