Baoshuan at The Oberoi, New Delhi: The Only Restaurant in India to be Mentored by a Twice Starred Michelin Chef.

Baoshuan, the must-try rooftop restaurant at The Oberoi, New Delhi, is a destination in itself. It is also the only restaurant in India to be mentored by a twice Michelin starred chef: Chef Andrew Wong, from London. In an exclusive interview, Chef Wong told CNN: “As a chef, the most important thing is to strive to better ourselves individually, as a team and as a restaurant. Michelin stars are like someone giving you something really valuable and asking you to look after it. If you look after it well, they let you look after it for another year. If you look after it badly, they take it away from you. The Baoshuan experience is no different from the experience we offer in London; the idea of celebrating a country that borders 14 other countries, has over 3,000 years of gastronomic history and is an evolving cuisine internationally, that is constantly absorbing other cultures and redefining them through the lens of Chinese culture. Dim Sum is something I have been working on for more than 20 years, constantly evolving it. The menu at Baoshuan is very, very special. It is the product of all those years of hard work and research to create a concept. It is fresher and lighter, with many layers of texture and flavour that is unique to Baoshuan.”

CNN News18 is India’s most awarded English News Channel, and is one of the most respected and dynamic media brands in the country today. The channel reaches an average of 45 million households every day. 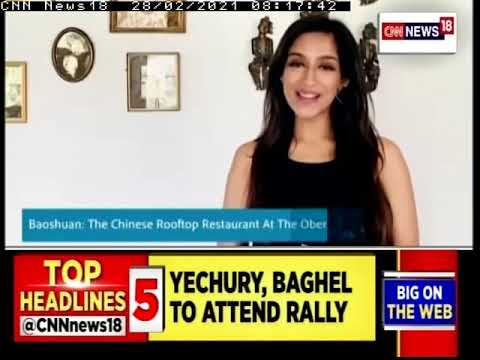